I love spring. I have so much energy. I’m motivated. It’s also the time I go crazy cleaning everything. This year I had two spring cleaning goals: clean my garage and get my kitchen pantry in order. The garage was going to be a straightforward clean up job but the pantry was a another story.

It was a disaster.

As a mom to a tot with multiple food allergies, I do a lot of cooking because I need to control what goes in D2’s food. I also want to feed my family nutritious wholesome food. But cooking was becoming a chore because I couldn’t find anything in my pantry.

I often bought multiples of staples because I couldn’t see what I already had.

I needed a pantry makeover STAT.

I started a board and collected hundreds of photos of expertly organized pantries.

All of the containers matched. They were perfectly labeled. I needed this. So I thought.

But how to get started? I panicked. Then an email came from out of the blue and changed everything. Enter Miriam Ortiz y Pino, professional organizer and owner of More Than Organized.

Miriam has helped hundreds of clutter-challenged clients declutter and organize their spaces so that they can focus on what’s most important.

Her motto is “Gain Control of Your Time, Stuff and Space.”

Miriam had seen my blog and introduced herself. After checking out her website and corresponding, we agreed to SKYPE. Honestly, I didn’t really believe I needed a professional organizer. I mean, what’s to do? You throw out junk, buy some beautiful containers, label them, line your jars up on the shelf and your done, right?

I was so very wrong. How much I needed Miriam’s services became clear after our SKYPE session.

I grabbed my laptop and walked her into my pantry.  To her credit, she didn’t cringe or judge me. Even when she saw this: 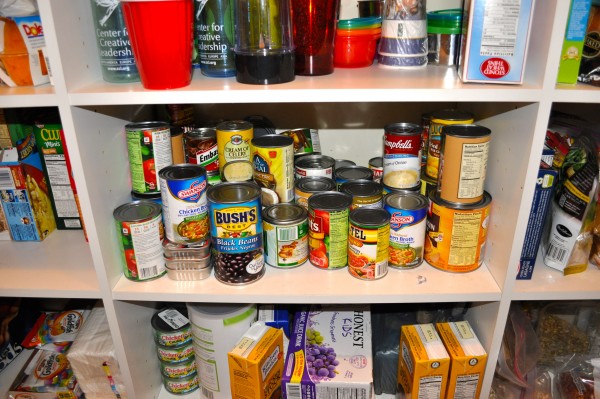 A typical shelf on my pantry before working with Miriam Ortiz y Pino. 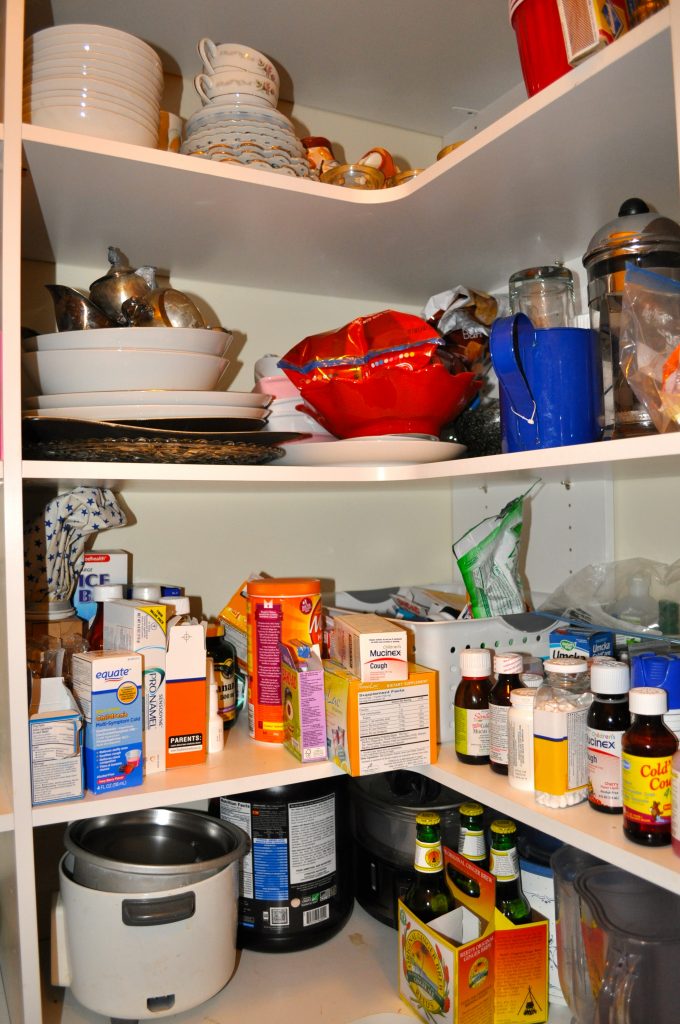 Another before shot. Note the overflowing drug shelf. Half of it was expired. Ack!

Miriam laid out her pragmatic philosophy. Your space needs to work for you. Functionality is more important than how it looks.  Organize according to your lifestyle.

She encouraged me to think of my pantry as a grocery store and organize it the way I shopped, focusing on the meals I made most frequently.  She instructed me to donate things I didn’t use (or make a plan to use them more frequently) and organize the shelves in such a way that I could see what was on the shelves so that food didn’t languish and go bad.

I thought she would send me on my way to buy dozens of new plastic containers but instead she instructed me to purge my pantry over a weekend.

Get rid of old and chipped dishes.

Toss any old canned goods well past their expiration dates.

Remove items you don’t use on a regular basis that are taking up space.

Call me if you get discouraged. This is the hardest part. She told me.

How hard could it be to throw stuff away? 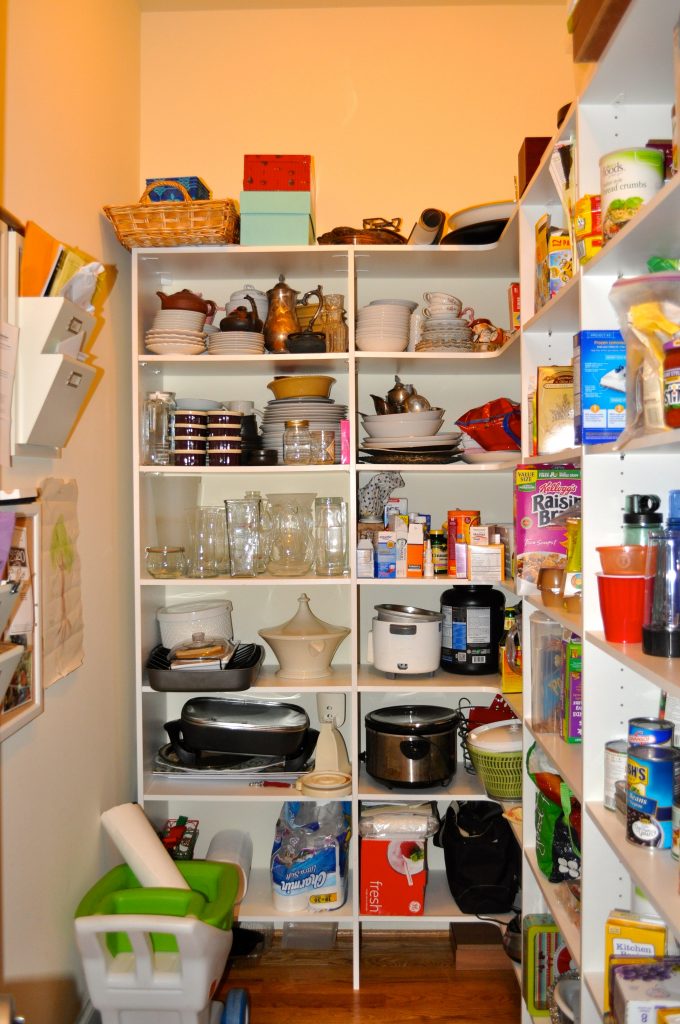 Once I started purging I couldn’t stop. I was stunned and embarrassed by what I found. A short list:

Six cans of PAM cooking spray
A dozen or more so cans of food dated 2012 or older (yikes!)
Dozens of plastic containers with no lids
Nine (count them NINE!) boxes of angel hair pasta
Eight boxes of tea (six were green)
Four bags of dried red beans
Fifteen bottles of expired supplements and drugs (Note: don’t flush these! See if your pharmacy has a disposal program)

Well, you get the picture. I had a lot of stuff. By the end of the weekend, I had filled up our large recycle bin and trashcan. I discovered even before organizing anything that I had four empty shelves.

The next step was to organize what remained.

After my purge, I found that I had plenty of see-through containers I could re-use for my makeover. I spent the following weekend grouping like items with like and arranging shelves so that items I used most were at eye level.

I organized D2’s favorite treats on one easy-to-reach shelf. Dr. D. loves peanuts (a no-no for D2), chips and sugary cereal so I created a snack shelf for him that was out of D2’s reach.

I love to bake so all baking items went on a single shelf in labeled containers. No more pouring sugar out of the bag. Now it’s in an easy- pour container. 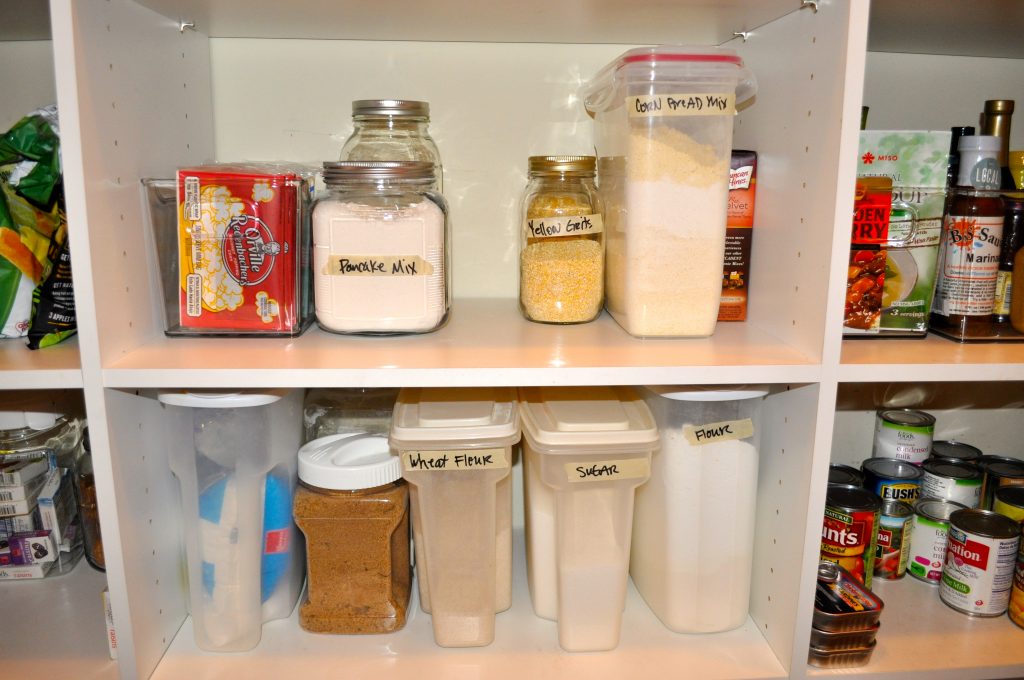 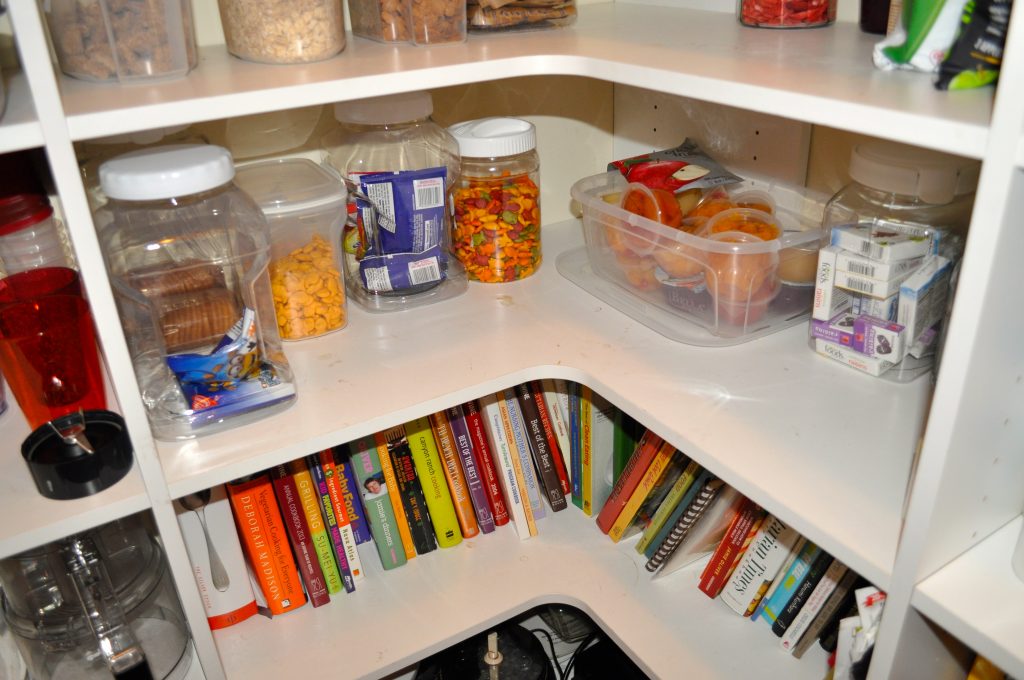 I made two separate runs to Target and Bed, Bath and Beyond for shelf organizers and see-through, BPA-free containers. I was able to repurpose a lot of my own containers, so I spent about an additional $150 on good quality containers. 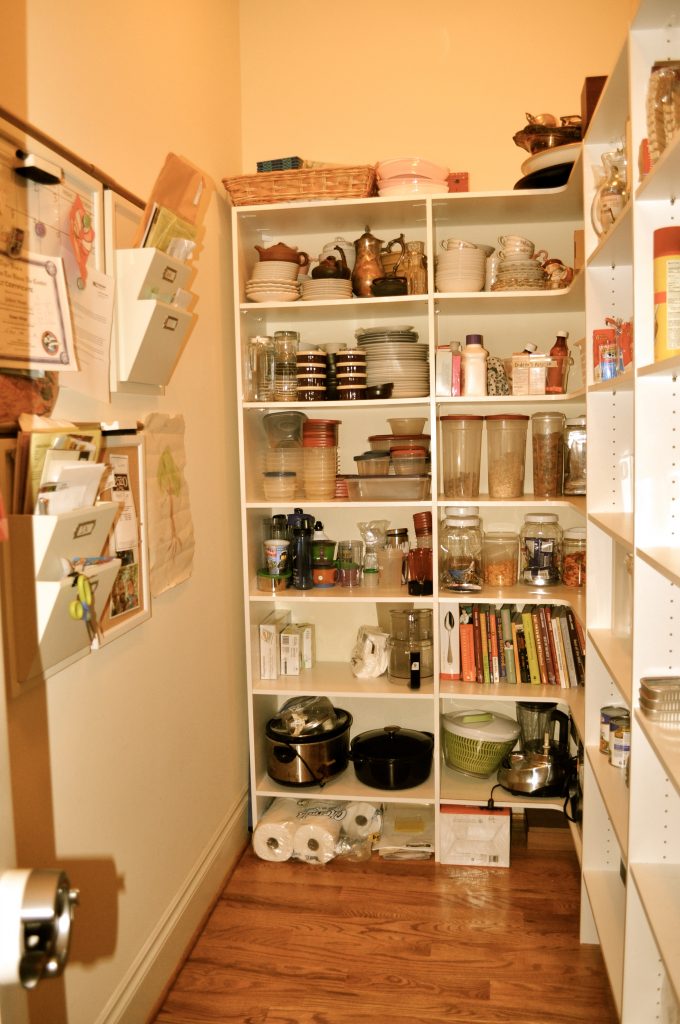 I may not win any Pinterest awards but I LOVE my pantry. Here are a few positive outcomes since re-organizing:

I told Miriam she is my designated fairy godmother. Her pragmatic approach to decluttering and organizing was just what I needed. She helped me understand that it was less about the fancy containers and picture-perfect shelves and more about understanding how my space needed to be used to make my life easier.

I’ve been living with my new pantry for a month now and it’s been a huge success for my family.

Please do check out Miriam Ortiz y Pino’s website at www.morethanorganized.net and see if she can help you. She’s also on Twitter at @miriam.morethanorganized.net.  While she lives and works in the Southwest, she advises clients all over the country and is available for phone and Skype consultations. 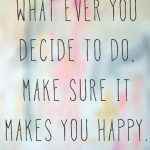 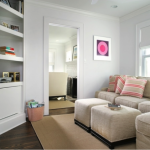 Take Back Your Home: How to Create a Shared Space Kids & Adults Will LoveLive